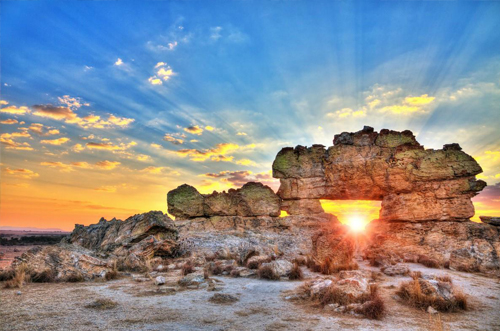 Isalo National Park is a National Park in the Ihorombe Region of Madagascar. The park is known for its wide variety of terrain, including sandstone formations, deep canyons, a palm-lined oases, and grassland. The closest town is Ranohira, and the closest cities are Toliara and Ihosy.

Isalo National Park was created in 1962 and has been administered by Madagascar National Parks authority since 1997. The Bara people have traditionally inhabited this area, a nomadic people subsisting on cattle (zebu) farming. This area has a tropical dry climate with seasonal rainfall.[1]

A local guide is required for visitors entering the park, and guides and porters can be hired in Ranohira. Treks in the park can last from several hours to a week or longer. The park includes several natural swimming pools which are popular among tourists, and are excellent sites to see the Benson’s Rock Thrush. The main threat to this park comes from illegal wildfires set in the park. The wildfires limit the extent of forest and maximize grasslands used by cattle

A total of 340 faunal species are known to inhabit the area, including 82 species of birds, 33 species of reptiles, 15 species of frogs and 14 species of mammals. Notable examples include the snake Acrantophis dumerili, the white-lipped bright-eyed frog (Boophis albilabris) and the Malagasy rainbow frog (Scaphiophryne gottlebei). The many species of bird found here include Benson’s rock thrush (Monticola sharpei bensoni), the knob-billed duck (Sarkidiornis melanotos) and the Madagascar ibis (Lophotibis cristata).[2]

Several different species of lemur are found in the park.

There are over 400 species of plant in the park, many of them endemic to the region. They include the Bismarck palm (Bismarckia nobilis) which recovers well after fires, Catharanthus ovalis which has medicinal uses, the elephant’s foot plant (Pachypodium rosulatum) and the aloe Aloe isaloensis named after the mountain massif.[2]